And the award for the most nuanced bigotry goes to...

This article - from Rachel Shabi in The Guardian - is really great.  It's about the Islamophobia encoded in the recent spate of much-lauded movies (and a TV show) about Americans, Arabs, terrorism... and all that kind of stuff.  Argo, Homeland, Zero Dark Thirty - all recently rewarded at the Golden Globes.  Supposedly nuanced and complex, they peddle the same old lies... just in a way acceptable to liberals.

The three winners have all been sold as complex, nuanced productions that don't shy away from hard truths about US foreign policy. And liberal audiences can't get enough of them. Perhaps it's because, alongside the odd bit of self-criticism, they are all so reassuringly insistent that, in an increasingly complicated world, America just keeps on doing the right thing. And even when it does the wrong thing – such as, I don't know, torture and drone strikes and deadly invasions – it is to combat far greater evil, and therefore OK.


Funny how the culture industry obediently steps up when the imperium is trying to relaunch (yet again) a rinsed-clean project of Muslimcidal 'humanitarian intervention'.  I'm all for complex, structural analyses of these synergies between policy and popcorn... but I can be a bit of a vulgar Marxist on this subject too.  I can't help noticing just how thoroughly integrated Hollywood is with the fucking Pentagon (told you I was vulgar).  See this excellent book for a brief, persuasive documentation of the phenomenon.

Oh, by the way, here's blogger Matt Cornell with a roundup of Twitter reactions to the 'nuanced' Zero Dark Thirty.  Like this 'nuanced' response, for instance: 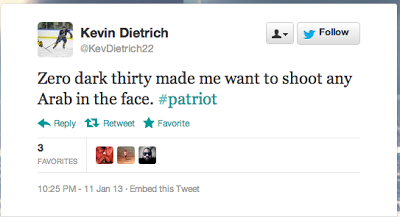 (Actually, I've blogged once before about the strange way that modern drama's aim to be all, like, morally ambiguous yeah? leads to reactionary effects - here.  Essentially, because some truths about the world are too damning and radical to seem neutral, they can not be allowed to play any part in dramatic ambiguity and complexity.  It works similarly to how some realities about the world cannot get into the news because the properly educated responsible journalist feels like she's not being neutral or balanced when she mentions them.)

Why do I care about movies and TV shows?  *Sigh*  Look, fiction matters.  In many ways, it matters more than non-fiction when it comes to influencing people's opinions (and I include myself in that).

Ayn Rand never proved anything as a 'philosopher', but as a best-selling and influential novelist she proved that popular fiction needs to be ruthlessly politically critiqued.  Fiction is such an enormous part of our daily cultural and social diet that to critique it is to critique the world as it is.

"This awareness of the torturer's hurt sensitivity as the (main) human cost of torture ensures that the film is not cheap rightwing propaganda: the psychological complexity is depicted so that liberals can enjoy the film without feeling guilty. This is why Zero Dark Thirty is much worse than 24, where at least Jack Bauer breaks down at the series finale." - Žižek, http://www.guardian.co.uk/commentisfree/2013/jan/25/zero-dark-thirty-normalises-torture-unjustifiable (Pretty good, though he wobbles at the end.)